During Daniel Webster’s first term as Secretary of State (1841–1843), the primary foreign policy issues involved Great Britain. These included the northeast borders of the United States, the involvement of American citizens in the Canadian rebellion of 1837, and the suppression of the international slave trade. The Webster-Ashburton Treaty, signed August 9, 1842, resolved these frictions in Anglo-American relations. On April 4, 1842, British diplomat Lord Ashburton arrived in Washington at the head of a special mission to the United States. The first order of business was settling the border between the United States and Canada. 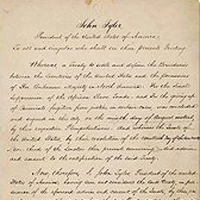 Several disputes had arisen from differing interpretations of the 1783 Treaty of Paris that ended the Revolutionary War. When these differences led New Brunswick officials to arrest some Americans in disputed areas, Maine called out the militia and seized the territory in question, the so-called Aroostock War. The incident dramatized the need for a border settlement. Webster and Ashburton agreed on a division of disputed territory, giving 7,015 square miles to the United States and 5,012 to Great Britain; agreed on the boundary line through the Great Lakes to the Lake of the Woods; and agreed on provisions for open navigation in several bodies of water. The issue of the Oregon border was left to a later date. After the suppression of the Canadian Rebellion of 1837, several participants fled to the United States where some American adventurers joined them. This band occupied a Canadian island in the Niagara River and engaged a U.S. ship, the Caroline, to re-supply them. Canadian troops seized the Caroline in a New York port, killing one crewman in the process, and set the ship free to drift over Niagara Falls. Later, Alexander McLeod crossed into New York, bragging that he had participated in the seizure of the Caroline, and had killed the crewman. McLeod was arrested. Great Britain maintained that McLeod had acted as a member the British forces and that it would take responsibility for his actions. Should he be executed, it would mean war.

The U.S. Government agreed that McLeod could not be tried for actions committed under orders of the British Government, but it was legally incapable of compelling the State of New York to release him. New York would not back down and tried McLeod. He was acquitted, but hard feelings remained. Webster and Ashburton agreed on the principles of international law involved and exchanged conciliatory statements. The United States enacted a law allowing Federal judges to discharge any person proved to have acted under instruction of a foreign power. The United States and Canada later concluded an extradition treaty. Secretary Webster would not agree to British inspection of U.S. ships suspected of carrying slaves, but did agree that U.S. warships would be maintained off the coast of Africa to search suspected slavers flying the American flag. Unfortunately, the United States did not implement this agreement very vigorously until the Civil War began. Webster and Ashburton also settled the case of the Creole, although it was not mentioned in the treaty. The Creole was sailing to New Orleans with 135 slaves, when a mutiny resulted in the death of one of the white passengers. The ship sailed to the Bahamas where the slaves were freed. Great Britain eventually paid $110,330 to the United States on the grounds that under international law officials in the Bahamas should not have allowed the slaves to be freed. Also, outside of the treaty, Great Britain agreed to end the impressment of American sailors.