Indian Treaties and the Removal Act of 1830

The U.S. Government used treaties as one means to displace Indians from their tribal lands, a mechanism that was strengthened with the Removal Act of 1830. In cases where this failed, the government sometimes violated both treaties and Supreme Court rulings to facilitate the spread of European Americans westward across the continent. 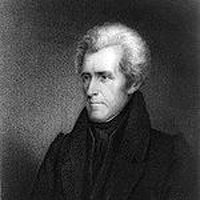 As the 19th century began, land-hungry Americans poured into the backcountry of the coastal South and began moving toward and into what would later become the states of Alabama and Mississippi. Since Indian tribes living there appeared to be the main obstacle to westward expansion, white settlers petitioned the federal government to remove them. Although Presidents Thomas Jefferson and James Monroe argued that the Indian tribes in the Southeast should exchange their land for lands west of the Mississippi River, they did not take steps to make this happen. Indeed, the first major transfer of land occurred only as the result of war.

In 1814, Major General Andrew Jackson led an expedition against the Creek Indians climaxing in the Battle of Horse Shoe Bend (in present day Alabama near the Georgia border), where Jackson’s force soundly defeated the Creeks and destroyed their military power. He then forced upon the Indians a treaty whereby they surrendered to the United States over twenty-million acres of their traditional land—about one-half of present day Alabama and one-fifth of Georgia. Over the next decade, Jackson led the way in the Indian removal campaign, helping to negotiate nine of the eleven major treaties to remove Indians. 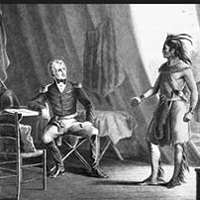 Under this kind of pressure, Native American tribes—specifically the Creek, Cherokee, Chickasaw, and Choctaw—realized that they could not defeat the Americans in war. The appetite of the settlers for land would not abate, so the Indians adopted a strategy of appeasement. They hoped that if they gave up a good deal of their land, they could keep at least some a part of it. The Seminole tribe in Florida resisted, in the Second Seminole War (1835–1842) and the Third Seminole War (1855–1858), however, neither appeasement nor resistance worked.

From a legal standpoint, the United States Constitution empowered Congress to “regulate commerce with foreign nations, and among the several States, and with the Indian tribes.” In early treaties negotiated between the federal government and the Indian tribes, the latter typically acknowledged themselves “to be under the protection of the United States of America, and of no other sovereign whosoever.” When Andrew Jackson became president (1829–1837), he decided to build a systematic approach to Indian removal on the basis of these legal precedents.

To achieve his purpose, Jackson encouraged Congress to adopt the Removal Act of 1830. The Act established a process whereby the President could grant land west of the Mississippi River to Indian tribes that agreed to give up their homelands. As incentives, the law allowed the Indians financial and material assistance to travel to their new locations and start new lives and guaranteed that the Indians would live on their new property under the protection of the United States Government forever. With the Act in place, Jackson and his followers were free to persuade, bribe, and threaten tribes into signing removal treaties and leaving the Southeast.

In general terms, Jackson’s government succeeded. By the end of his presidency, he had signed into law almost seventy removal treaties, the result of which was to move nearly 50,000 eastern Indians to Indian Territory—defined as the region belonging to the United States west of the Mississippi River but excluding the states of Missouri and Iowa as well as the Territory of Arkansas—and open millions of acres of rich land east of the Mississippi to white settlers. Despite the vastness of the Indian Territory, the government intended that the Indians’ destination would be a more confined area—what later became eastern Oklahoma. 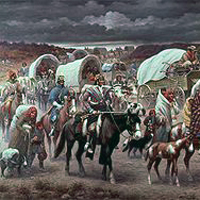 The Cherokee Nation resisted, however, challenging in court the Georgia laws that restricted their freedoms on tribal lands. In his 1831 ruling on Cherokee Nation v. the State of Georgia, Chief Justice John Marshall declared that “the Indian territory is admitted to compose a part of the United States,” and affirmed that the tribes were “domestic dependent nations” and “their relation to the United States resembles that of a ward to his guardian.” However, the following year the Supreme Court reversed itself and ruled that Indian tribes were indeed sovereign and immune from Georgia laws. President Jackson nonetheless refused to heed the Court’s decision. He obtained the signature of a Cherokee chief agreeing to relocation in the Treaty of New Echota, which Congress ratified against the protests of Daniel Webster and Henry Clay in 1835. The Cherokee signing party represented only a faction of the Cherokee, and the majority followed Principal Chief John Ross in a desperate attempt to hold onto their land. This attempt faltered in 1838, when, under the guns of federal troops and Georgia state militia, the Cherokee tribe were forced to the dry plains across the Mississippi. The best evidence indicates that between three and four thousand out of the fifteen to sixteen thousand Cherokees died en route from the brutal conditions of the “Trail of Tears.”

With the exception of a small number of Seminoles still resisting removal in Florida, by the 1840s, from the Atlantic to the Mississippi, no Indian tribes resided in the American South. Through a combination of coerced treaties and the contravention of treaties and judicial determination, the United States Government succeeded in paving the way for the westward expansion and the incorporation of new territories as part of the United States.