During this crucial period, the United States pursued a policy of expansion based on “manifest destiny,” the ideology that Americans were in fact destined to extend their nation across the continent. 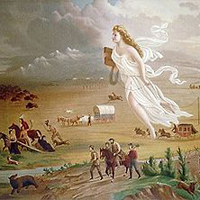 The United States even proved to be willing to go to war to secure new territories. While it managed to negotiate an agreement with Great Britain to secure the Oregon territory, acquiring the valuable territory south of it—including California and its important Pacific harbors—required the use of force, and, in 1845, the United States embarked on its first offensive war by invading Mexico.

In addition to advancing westward, the United States also continued to expand economically through investment in foreign markets and international trade. With these growing commercial interests, came a larger navy and increased international presence. The United States began to turn to the Pacific for new economic opportunities, establishing a presence in China, and opening Japan and Korea to western commercial interests.