Despite the ramshackle nature of the foreign affairs establishment, the Department of State was still able to make significant contributions to the nation during this period. 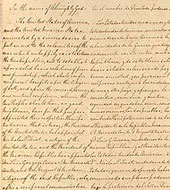 Image of a page from the Treaty of Guadalupe Hidalgo (1848)
Perhaps the most striking achievement was the successful resolution of many outstanding difficulties with Great Britain, the one nation able to threaten the security of the United States. After the unfortunate War of 1812, Anglo-American controversies were all peacefully resolved: the Webster-Ashburton treaty of 1842 settled the boundary between northeastern Maine and Canada, the Oregon treaty of 1846 extended the U.S.-Canadian border to the West coast, and the Clayton-Bulwer treaty of 1850 provided an understanding on the construction of any future canal across Central America.

Of equal importance were successful negotiations that furthered American domination of the continent. The Treaty of Guadalupe Hidalgo (1848) was of key importance because it ended the Mexican War and annexed a tremendous amount of territory north and west of the Rio Grande to California. The purchase of Alaska from Russia in 1867 was also a significant triumph for diplomacy. Despite the generally amateurish nature of diplomacy at this time, no serious setbacks marred the nation's foreign affairs between 1823 and 1867.