As an important neutral trading nation, the United States became ensnarled in the European conflict that pitted Napoleonic France against Great Britain and her continental allies. 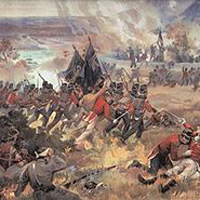 In 1806 France prohibited all neutral trade with Great Britain and in 1807 Great Britain banned trade between France, her allies, and the Americas. Congress passed an embargo act in 1807 in retaliation, prohibiting U.S. vessels from trading with European nations, and later the Non-Intercourse Acts, aimed solely at France and Britain. The embargo and non-intercourse act proved ineffective and in 1810 the United States reopened trade with France and Great Britain provided they ceased their blockades against neutral trading. Great Britain continued to stop American merchant ships to search for Royal Navy deserters, to impress American seamen on the high seas into the Royal Navy, and to enforce its blockade of neutral commerce. Madison made the issue of impressment from ships under the American flag a matter of national sovereignty—even after the British agreed to end the practice—and asked Congress for a declaration of War on Great Britain on June 1, 1812. Many who supported the call to arms saw British and Spanish territory in North America as potential prizes to be won by battle or negotiations after a successful war.

Pro-British Federalists in Washington were outraged by what they considered Republican favoritism toward France. The leading Republican, Thomas Jefferson responded, that “the English being equally tyrannical at sea as he [Napoleon] is on land, and that tyranny bearing on us in every point of either honor or interest, I say ‘down with England.’” The United States declared the war on Britain. After Napoleon’s disastrous Russian campaign of 1812, the British concentrated on the American continent, enacting a crippling blockading of the east coast, attacking Washington and burning the White House and other Government buildings, and acquiring territory in Maine and the Great Lakes region. American forces, however, won important naval and military victories at sea, on Lake Champlain, and at Baltimore and Detroit. Canadians defeated an American invasion of Lower Canada. By 1814 neither side could claim a clear victory and both war weary combatants looked to a peaceful settlement.

Under the mediation of the Czar of Russia, Great Britain and the United States came together in the summer of 1814 to negotiate the terms of peace. On Christmas Eve British and American negotiators signed the Treaty of Ghent, restoring the political boundaries on the North American continent to the status quo ante bellum, establishing a boundary commission to resolve further territorial disputes, and creating peace with Indian nations on the frontier. As the Ghent negotiations suggested, the real causes of the war of 1812, were not merely commerce and neutral rights, but also western expansion, relations with American Indians, and territorial control of North America.