One outstanding diplomat did serve the United States under Abraham Lincoln during the most serious 19th century challenge to the nation’s security—Secretary of State William Henry Seward. 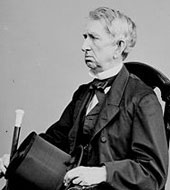 The American Civil War created excellent opportunities for European nations to meddle in the Western Hemisphere, either by violating the Monroe Doctrine or by extending aid to the rebellious South. In the initial stages of the war, Secretary of State Seward, ambitious and powerful, tried to gain control of President Lincoln’s Cabinet and implement policies on his own authority. Fearing that Lincoln was inadequate to the task, Seward complained that the administration had no policy in dealing with the seceding Southern states and he offered to take over the policy functions of the Government.

Lincoln outmaneuvered Seward, but in the process gained his respect. In time, the two developed a remarkably effective collaboration. Working through Charles Francis Adams, the U.S. Minister in London, Seward was able to prevent British recognition of the Confederate States and preserve British neutrality, a move that severely handicapped the southern quest for independence. The Secretary's success in fending off serious trouble during the Civil War demonstrated that great achievements in foreign relations almost always depended on close relations between the President and the Department of State.

Perhaps in part because of his successful leadership of the Department and his strong pro-Union stance, Seward was also a target of the plot that led to Lincoln’s assassination in April 1865. Recuperating at home from a recent carriage accident, Seward was helpless when a conspirator entered his home just as Lincoln was being murdered. Seward managed to fend off the full force of his attacker until his son Frederick, who was Assistant Secretary of State at the time, rushed into the room to try to protect his father. Secretary Seward was stabbed in the face and throat, and his son was wounded more seriously. Both recovered, however, and continued to serve another four years under Lincoln’s successor, President Andrew Johnson. Seward is the only U.S. Secretary of State in history to be the target of a would-be assassin.

Seward had two major postwar diplomatic achievements: the removal of French troops from Mexico and the purchase of Alaska from Russia. During the Civil War, French troops had moved into Mexico, ostensibly to collect debts from the bankrupt Mexican Government. Supported by these troops—and in violation of the Monroe Doctrine—Napoleon III of France installed the Archduke Maximilian of Austria as Emperor of Mexico in 1864. As long as the Civil War continued, Seward could only protest. After the war, Seward skillfully escalated his diplomatic protests, while resisting American domestic pressures for a military expedition into Mexico. In 1867, Napoleon finally acquiesced to Seward’s careful diplomacy and withdrew the French troops.

Seward’s interest in buying Alaska derived from his geopolitical vision. Like many 19th century American political figures, he envisioned an expanding American empire increasingly involved in foreign commerce, including the China trade. Although some of his expansionist initiatives were unsuccessful, Seward appropriated the Midway Islands and, most important, in early 1867 negotiated with the Russian minister in Washington for the purchase of Alaska for $7.2 million. Although the purchase was widely satirized as “Seward’s folly” or “Seward’s icebox,” the Secretary correctly gauged the widespread popular support for the treaty, which the Senate overwhelmingly approved.