Kennedy’s close advisers believed that Eisenhower’s foreign policy establishment was stultified, slow moving, overly reliant on brinksmanship and massive retaliation, and complacent. Their fear was that after eight years, the State Department would be unable to implement their new international vision. The new President was determined to control foreign policy through a young and energetic White House and NSC staffers who would make their own informal contacts within the foreign affairs bureaucracy. Furthermore, Kennedy thought that Eisenhower and Secretaries Dulles and Herter had all but ceded the newly emerging states in Latin America, Asia, and Africa to the communists. 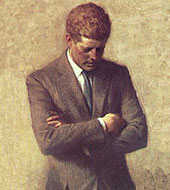 The execution of Kennedy’s foreign policy did not quite live up to the stirring rhetoric of his inaugural speech, in which he said: “Let every nation know, whether it wishes us well or ill, that we shall pay any price, bear any burden, meet any hardship, support any friend, oppose any foe, in order to assure the survival and the success of liberty.” In fact, his foreign policy was marred by a string of failures.

First, Kennedy gave the green light to an Eisenhower-initiated invasion of the Bay of Pigs in Cuba in 1961. Based on faulty intelligence, the military action, which was carried out by Cuban exiles without crucial air support was a fiasco. Then in June 1961 at the Vienna Summit with Soviet Premier Nikita Khrushchev, Kennedy was unprepared and seemed to be a lightweight playboy. Next, Kennedy’s tough talk about the Soviet Union in Berlin did not improve the situation—instead, the Soviets built the Berlin Wall. Finally, his decision not to draw the line against communism in Laos, as the Eisenhower Administration had urged, left South Vietnam as the place to fight communism in Asia.

Kennedy’s overall record was a mixed bag of success and failure. At the President’s urging, Congress established the U.S. Arms Control and Disarmament Agency (ACDA) in 1961 as a separate entity under Department of State auspices. The Administration built on Eisenhower’s extensive negotiations with the Soviet Union, but the Limited Test Ban Treaty signed by Kennedy only outlawed atmospheric but not underground nuclear testing. In Vietnam, the Kennedy Administration approved the overthrow of President Diem, believing that any successor government would have to be an improvement over Diem’s. They were wrong. Finally, U.S. initiatives in Western Europe, such as support for British entry into the European Economic Community and European defense integration, also were unsuccessful.