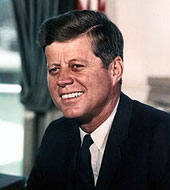 President John F. Kennedy
John F. Kennedy entered office determined to restore the prestige and power of the United States, which he felt had eroded during Eisenhower’s watch and to stop the expansionism of the Soviet Union.

Kennedy’s policy led to a concerted diplomatic effort to win new friends among the “non-aligned” nations of the world. But it was a policy that also drew the United States into frequent, intense clashes with the Soviet Union—and brought the world to the brink of nuclear war.