In October 1962, the Kennedy Administration faced its most serious foreign policy crisis. 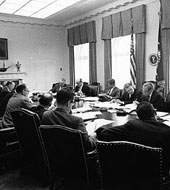 President Kennedy with his cabinet during the Cuban Missile Crisis
Soviet Premier Nikita Khrushchev saw an opportunity to strengthen the relationship between the Soviet Union and Fidel Castro’s Cuba and make good its promise to defend Cuba from the United States. In May 1960, Khrushchev began to ship ballistic missiles to Cuba and technicians to operate them. He believed that President Kennedy was weak and would not react to the Soviet move.

After extensive consultation with his foreign policy and military advisers, Kennedy blockaded Cuba on October 22, 1962. The two sides stood on the brink of nuclear war, but Khrushchev capitulated six days later and the missiles were dismantled. In return, Kennedy disbanded its own missile sites in Turkey. The most confrontational period in US-Soviet relations since World War II was at an end.