In 1783 Congress moved the seat of government from Princeton to Annapolis, where it remained until August 19, 1784.1 Although the Congress had resolved to meet at Annapolis on November 26, 1783,2 there was not a sufficient number of members in attendance "to proceed to business" until December 13, 1783.3 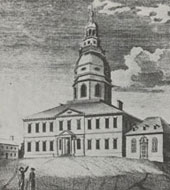 A front view of the State House at Annapolis

The papers of the Department of Foreign Affairs remained locked, sealed, and inaccessible,4 and the President of Congress acted as Secretary for Foreign Affairs ad interim 5 until March 2, 1784, when Congress elected Henry Remsen, Jr., "as under secretary in the office for foreign affairs, to take charge of the papers in that office."6 He served in this capacity, taking charge of the books and papers without other assistance, until Livingston's successor, John Jay, entered upon his duties as Secretary for Foreign Affairs in December 1784.7

Several reasons could be suggested for this conclusion:

Since only the President of Congress would use the Governor's house, occupying it as his residence, Congress and its subordinate officers, of whom Remsen was one, would presumably use the State House-though for business purposes only, finding residences for themselves elsewhere.

The Maryland State Capitol, or State House, in which the Continental Congress met in 1783-1784, is still standing-although altered and enlarged since that time-on an elevated area called "State Circle" in the center of Annapolis.14 Its history extends back to 1769, when the Colonial Assembly appropriated L7,500 sterling toward the erection of a new building on the site of an earlier State House. Although the cornerstone was laid in 1772, the General Assembly did not meet in the building until 1780.

This building consisted of a basement and two full stories of brick construction surmounted by a wooden superstructure. It measured 120 feet across the front and 82 feet in depth exclusive of a semi-octagonal bay which was later removed. A dome, of at least the outside structure of one, in place in 1774, was torn down in 1785 and replaced with another that was begun in 1785 or 1786 and finished on the outside in 1788 and on the inside in 1793.

The new dome was 40 feet in diameter at its base. Above the dome was cupola, and above it a spire extending 200 feet from the ground.

The main entrance to the building was through a modest portico facing southeast. This portico opened into a hall that gave a view of the interior of the dome. On the right-hand side of the hall was the Senate chamber and on the left-hand side the chamber of the House of Delegates, each with lobby and a gallery. From the hall two flights of stairs led to offices on the second floor.

Over the years the interior of the building has been subjected to considerable alteration, and an annex has been added at the rear of the building. Restoration of the old Senate chamber, where the Continental Congress met however, gives to that room today its original appearance.

Many incidents of historic interest took place in this building. Among them were Washington's resignation as commander in chief of the Continental Army on December 23, 1783, the ratification of the definitive treaty of peace with Great Britain on January 14, 1784, and the meeting of the Annapolis Convention in 1786.