After meeting one day at Lancaster, Congress moved to York so that the Susquehanna River would be between it and the enemy. It was at York from September 30, 1777, until June 27, 1778. While there, Congress met at the York County Court House. 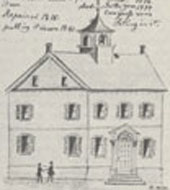 The Court House was erected in 1754. Its cupola was like that on the Court House in Lancaster.27 There were subsequent additions to the building after it was first built. In 1790 an adjoining office building was constructed. In 1792 a gallery was built in the court room, and in 1796 the interior was completed as a formal court room. In 1814 two additional gables and a large clock tower were added.

In 1838 construction on a new and larger Court House on a new site was begun, and the old Court House was demolished in 1841. The York County Bicentennial Commission is presently planning to reconstruct the old Court House in time for the 1977-78 celebration of the 200th Anniversary of the meeting of the Congress in York.

Congress received word that the British army had evacuated Philadelphia on June 18, 1778. On June 24 it resolved that Congress adjourn on next Saturday, June 27, "from this place to meet at Philadelphia, on Thursday, the 2 day of July next."28

When the members of Congress returned to Philadelphia, they found that the British had left the State House and many other buildings in a disgraceful condition, and there was mention of the Congress "shuffling from Meeting House to College Hall."29 Josiah Bartlett, a delegate from New Hampshire, in a letter dated July 13, 1778, wrote:

"The Congress meets in the College Hall, as the State House was left by the enemy in a most filthy and sordid situation, as were many of the public and private Buildings in the City. Some of the genteel Houses were used for Stables and Holes cut in the Parlor floors & their dung shoveled into the Cellars. The country Northward of the City for several Miles is one common waste. The Houses burnt, the Fruit Trees & others cut down and carried off, fences carried away, Gardens and Orchard..."30

Because of the conditions at Philadelphia, Congress had some difficulty reassembling. Although some members met on July 2 according to the adjournment, it was not until July 7 that there was a quorum and business could be conducted in a normal manner. On December 1, 1778, the Congress extended its working hours, meeting at least two hours each evening until the present state of foreign affairs had been fully considered.