By the mid-1950s there were a little over 7,000 employees in the Department of State, including the International Cooperation Administration. These employees were housed in 29 buildings around Washington.1 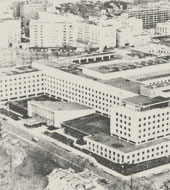 The plan to house the entire Department of State in one building was advanced by an act approved August 4, 1955, in which Congress appropriated $1,000,000 for the expenses of "planning the extension and remodeling, under the supervision of the General Services Administration, of the State Department Building."2 The project called for considerable remodeling and for an extension which would add approximately 1,040,000 square feet of usable space to the 274,000 square feet in the existing building.

On January 10, 1956, the General Services Administration awarded contracts to draw plans for the proposed building to the architectural firms of Graham, Anderson, Probst & White, Inc:, of Chicago, and Harley, Ellington & Day, Inc., of Detroit. The Washington firm of A.R. Clas was the local liaison. Contractor for the construction was John McShain, Inc., of Philadelphia.

The project was inaugurated on September 13, 1956, in a brief ceremony at Temporary H Building, located at Twenty-third and C Streets. Certain officers of the Department of State and the General Services Administration participated in the ceremony, including Deputy Under Secretary of State Loy W. Henderson, who, after making a brief statement,3 applied a wrecking bar to bring down the building sign. This marked the beginning of what would eventually be the dismantling of Temporary H and the other two World War II temporary buildings on Twenty-third Street in order to clear the site for the new foundations.

On January 5, 1957, President Eisenhower joined with Secretary of State Dulles in laying the cornerstone. The President used the same trowel that was used by George Washington to lay the cornerstone of the U.S. Capitol on September 18, 1793. A sealed metal box containing a selection of historic documents was deposited in the cornerstone.4

Under the supervision of the Public Buildings Service of the General Services Administration, the addition was completed in 1961 at a cost of $52,720,000.5 Secretary of State [Page 51] Christian A. Herter presided over the dedication ceremonies on January 5, 1961.6

The extension is approximately four times as large as the initial section.7 The extended building covers an area of four square blocks bounded by Virginia Avenue, C Street, Twenty-first Street, and Twenty-third Street in northwest Washington. There are seven floors of office space plus an eighth floor for special purposes and mechanical equipment.

Materials used in the building came from various locations in the United States. The facade is limestone from Bedford, Ind. Granite, used around the entrances and at the lower levels, was quarried in Cold Spring, Minn. Vestibule walls at the north and south entrances are veined ebony granite from St. Cloud, Minn. Flagstones at the north, south, and west entrances and in the north and south courts are also granite gray and black from Minnesota, and pink from Texas. One of the few imports came from Italy. It is the glass mosaic tile, known as Byzantine, which forms the ceilings of the entrance canopies.

The main approach to the building is north from Constitution Avenue along Twenty-second Street to the primary entrance on C Street. This diplomatic entrance (or south lobby), three stories high and 75x175 feet, is the main entrance for visiting dignitaries. The front and rear walls are of glass in aluminum frames, while the end walls are of Tennessee marble known as St. Genevieve breche rose. Thirty-foot-high marble and granite columns support the luminous plastic grid ceiling. Radiant heat is furnished from pipes embedded in concrete under the terrazzo floor. The flags of the nations with which the United States maintains diplomatic relations form a colorful display along the north wall of the lobby. At each end of the lobby is a memorial plaque honoring Americans who lost their lives under heroic or tragic circumstances in the foreign service. Elevators at either end provide access to the offices of the Secretary, the Deputy Secretary, and the Under Secretaries on the seventh floor, and to the diplomatic functions area on the eighth floor. The Protocol Office is conveniently located to the east of the lobby.

Space allocation in the new building is based on a "vertical" plan as opposed to the old "horizontal" plan. That is, organizational units are located in a pyramid style on two or more floors, rather than being spread out over great distances on one floor. If the horizontal plan were followed, a section of a large bureau might be located as far as two blocks away from its central office. With the vertical plan, personnel are near elevators and stairways that enable them to reach their central office quickly.

The Secretary and his immediate staff are located on the seventh floor, on the south side of the building, overlooking the Lincoln Memorial and the Potomac River. Visitors must pass through one of two outer reception rooms to an inner lobby where the Secretary's receptionist is seated. Her desk faces a wide corridor flanked by diplomatic waiting rooms. The corridor leads to a gallery, on the walls of which are hung the portraits of all former Secretaries of State. The gallery permits the Secretary, the Deputy Secretary, and the Under Secretaries to reach each other's offices without being visible to visitors in the waiting rooms.

Nearly all Assistant Secretaries and those of equivalent rank, together with their immediate staffs, have appropriate space on the sixth floor. The pyramid broadens toward the base on the lower floors where public, international, and administrative services and functions are generally located.

Special features and facilities in the new building include an international conference area consisting of a large conference room fully equipped for simultaneous interpretation, smaller conference rooms, offices for delegates, and a delegates' lounge adjoining the International Conference Room. Near the Conference Room is an auditorium capable of seating 800 people, with its entrance on Twenty-third Street. President Kennedy used this auditorium for press conferences. The Department's library is located in the south and central part of the building, on the third floor. The book area comprises four stack levels served by an elevator and book lift.

An area is provided on the eighth floor for official functions such as diplomatic dinners and receptions, where the Secretary of State and other ranking officers of the Government may fulfill their responsibilities for official entertainment. The three principal diplomatic reception rooms are the John Quincy Adams drawing room, the Thomas Jefferson reception room, and the Benjamin Franklin state dining room. These rooms are largely furnished by a growing collection of antiques and art treasures provided by the American people on loan or as gifts. There is also a series of ongoing architectural improvements of the rooms to make them more in keeping with the period furnishings.8

A pneumatic tube system transmits mail and documents within the building, and modern communications equipment provides rapid contact with posts abroad. There are also electric data-processing systems and up-to-date facilities for storage of records and other information.

On the first floor, between the north and south courts, is an exhibition hall. Presently it contains a Bicentennial display entitled "200 years of American Foreign Relations-1776-1976."

The Thomas Jefferson Reception Room as seen through a Palladian arch.
Other exhibits generally in this same hall include a model of the building, an electronic map showing the location of the U.S. Foreign Service posts in the countries of the world, a display on "The Secretaries of State and Historic Achievements of American Diplomacy" (with replicas of particularly significant international treaties), and the Great Seal of the United States and its press (which is in the custody of the Department of State and is still in use).

Even with the completion of the extension in 1961, the building has not been large enough to house all of the Department of State.9 It was necessary, therefore, for the Department to continue to occupy annex buildings.