The Bay of Pigs Invasion and its Aftermath, April 1961–October 1962

A left-wing revolution in Cuba had ended in 1959 with the ouster of President Fulgencio Batista and the establishment of a new government under Premier Fidel Castro. The Castro regime quickly severed the country’s formerly strong ties with the United States by expropriating U.S. economic assets in Cuba and developing close links with the Soviet Union. 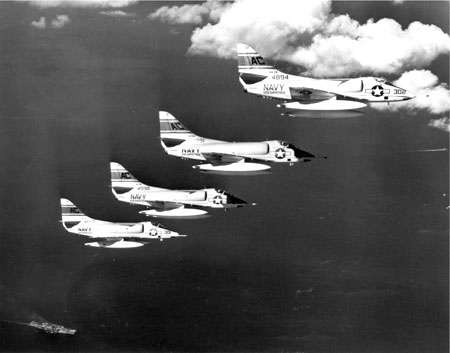 Skyhawks from the USS Essex fly sorties over combat areas during the Bay of Pigs. (Robert L. Lawson Photograph Collection)

These developments proved a source of grave concern to the United States given Cuba’s geographical proximity to the United States and brought Cuba into play as a new and significant factor in the Cold War. In March 1960, President Dwight D. Eisenhower directed the Central Intelligence Agency (CIA) to develop a plan for the invasion of Cuba and overthrow of the Castro regime. The CIA organized an operation in which it trained and funded a force of exiled counter-revolutionary Cubans serving as the armed wing of the Democratic Revolutionary Front, known as Brigade 2506.

Following his election in November 1960, President John F. Kennedy learned of the invasion plan, concluded that Fidel Castro was a Soviet client posing a threat to all of Latin America and, after consultations with his advisors, gave his consent for the CIA-planned clandestine invasion of Cuba to proceed. Launched from Guatemala, the attack went wrong almost from the start. Components of Brigade 2506 landed at the Bay of Pigs on April 17, 1961 and were defeated within 2 days by Cuban armed forces under the direct command of Castro.

The failed invasion strengthened the position of Castro’s administration, which proceeded to openly proclaim its intention to adopt socialism and pursue closer ties with the Soviet Union. It also led to a reassessment of Cuba policy by the Kennedy administration. The President established a committee under former Army Chief of Staff General Maxwell Taylor and Attorney General Robert Kennedy to examine the causes of the defeat suffered at the Bay of Pigs.

This examination and policy assessment, initiated in May 1961, led in November of that year to a decision to implement a new covert program in Cuba, with the codename of Operation Mongoose. Oversight for Operation Mongoose was provided by the 5412/2 Special Group, under the auspices of the National Security Council, expanded to include General Taylor and Attorney General Kennedy.

Operation Mongoose was designed to do what the Bay of Pigs invasion failed to do: remove the Communist Castro regime from power in Cuba. Orchestrated by the CIA and Department of Defense under the direction of Edward Lansdale, Operation Mongoose constituted a multiplicity of plans with wide-ranging purpose and scope. Lansdale presented the Project’s six-phase schedule to Attorney General Kennedy on February 20, 1962, and President Kennedy received a briefing on the operation’s components on March 16, 1962. Lansdale outlined the coordinated program of political, psychological, military, sabotage, and intelligence operations, as well as proposed assassination attempts on key political leaders, including Castro. Monthly components of the operation were to be set in place to destabilize the communist regime, including the publication of Anti-Castro propaganda, provision of armaments for militant opposition groups, and establishment of guerilla bases throughout the country, all leading up to preparations for an October 1962 military intervention in Cuba. Some (though not all) of the planned Operation Mongoose actions were deployed during 1962, but the military intervention did not occur, and the Castro regime remained in power.

Although not considered as significant a U.S. foreign policy failure and embarrassment as the Bay of Pigs invasion, Operation Mongoose failed to achieve its most important goals. Meanwhile, throughout the spring and summer of 1962, U.S. intelligence reports indicated expanded arms shipments from the Soviet Union to Cuba. Amidst growing concern in Washington over whether the Soviet weapons being introduced into Cuba included ballistic missiles with nuclear warheads, in October 1962 the Kennedy administration suspended Operation Mongoose in the face of this far more serious threat—one that resulted in the most dangerous confrontation between the United States and the Soviet Union during the Cold War.