The 1967 Arab-Israeli War marked the failure of the Eisenhower, Kennedy, and Johnson administrations’ efforts to prevent renewed Arab-Israeli conflict following the 1956 Suez War. Unwilling to return to what National Security Advisor Walter Rostow called the “tenuous chewing gum and string arrangements” established after Suez, the Johnson administration sought Israel’s withdrawal from the territories it had occupied in exchange for peace settlements with its Arab neighbors. This formula has remained the basis of all U.S. Middle East peacemaking efforts into the present. 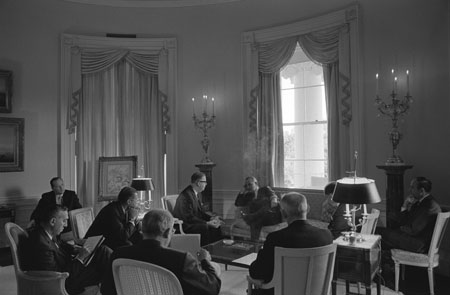 President Lyndon Johnson and his advisors meet with Israeli Foreign Minister Abba Eban to discuss the developing crisis in the Middle East, May 26, 1967. (LBJ Library photo by Yoichi Okamoto)

The Johnson Administration and the Arab-Israeli Conflict, 1963–1967

Lyndon Johnson’s presidency witnessed the transformation of the American role in the Arab-Israeli conflict. Until the early 1960s, the United States had adhered to the terms of the Tripartite Declaration of 1950, wherein the United States, United Kingdom, and France had pledged to prevent aggression by Middle Eastern states and oppose a regional arms race. The United States had pressed Israel to withdraw from the Sinai Peninsula and Gaza Strip after Suez, and rejected Israeli requests for all but limited quantities of defensive weapons. By the time Johnson took office, however, U.S. policymakers concluded that this policy was no longer sustainable. Soviet arms sales to left-leaning Arab states, especially Egypt, threatened to erode Israel’s military superiority. Johnson’s advisors worried that if the United States did not offset this shift in the balance of power, Israel’s leaders might launch a preventive war or develop nuclear weapons.

Initially, the Johnson administration sought to convince Egyptian President Gamal Abdul Nasser and the Soviet leadership to work toward a regional arms control regime, but neither party proved receptive. Thus, in 1965, Johnson agreed to sell Israel M48A3 tanks, followed by A–4 Skyhawk aircraft in 1966. The rationale behind these sales, as National Security Council staffer Robert Komer put it, was that “Arab knowledge that they could not win an arms race against Israel should contribute long-term to the damping down of the Arab-Israeli dispute.”

However, U.S. efforts to preserve the regional balance of power were soon undermined by Fatah and other Palestinian guerilla organizations, which began attacking targets inside Israel. The Johnson administration tried to intercede with Fatah’s Syrian patrons and to prevent Israeli retaliation against Jordan, from which most Palestinian raids were launched. U.S. officials worried that Israeli reprisals could undermine Jordan’s King Hussein, who had secretly agreed to keep Jordan’s strategically crucial West Bank a buffer zone. In November 1966, when the Israelis attacked the West Bank town of Samu‘ , the Johnson administration voted for a United Nations Resolution condemning Israel, admonished Israeli officials, and authorized an emergency airlift of military equipment to Jordan.

While the administration’s response to Samu‘ helped prevent further Israeli reprisals against Jordan, it failed to address the underlying problem of Palestinian cross-border attacks. By the spring of 1967, the Israelis were retaliating forcefully against Syria, whose leaders demanded that Egypt intervene on their behalf.

On May 13, 1967, Soviet officials informed the Syrian and Egyptian Governments that Israel had massed troops on Syria’s border. Though the report was false, Nasser sent large numbers of Egyptian soldiers into the Sinai anyway. On May 16, Egypt demanded that the United Nations Emergency Force (UNEF), which had been deployed in the Sinai Peninsula and the Gaza Strip since 1957, withdraw from Israel’s border. Secretary-General U Thant replied that he would have to withdraw UNEF from all its positions, including Sharm al-Shaykh, which would put political pressure on Nasser to close the Straits of Tiran to Israeli shipping. Nasser remained adamant, and on May 22, after UNEF withdrew, he announced that he would close the Straits. In 1957, President Dwight D. Eisenhower had promised that the United States would treat the closure of the Straits as an act of war. Johnson now had three unwelcome options: to renege on Eisenhower’s promise, acquiesce in an Israeli attack on Egypt, or order U.S. forces to reopen the waterway.

Instead, the President played for time. He sought international and Congressional support for Operation Red Sea Regatta, which called for a coalition of maritime nations to send a “probing force” through the Straits if Egypt refused to grant all nations free passage through them. Simultaneously, Johnson implored the Soviets to intercede with Nasser and urged Israeli restraint. “Israel,” Johnson told Israeli Foreign Minister Abba Eban on May 26, “will not be alone unless it decides to go it alone.” Yet over the following week, the administration failed to gain domestic or foreign backing for “Regatta.” Meanwhile, Jordan joined the Arab coalition, heightening the pressure for an Israeli strike. Though Johnson continued to caution Israel against preemption, a number of the President’s advisors had concluded that U.S. interests would be best served by Israel “going it alone” by the time the Israelis actually did so.

The War and its Aftermath

Between June 5 and June 10, Israel defeated Egypt, Jordan, and Syria and occupied the Sinai Peninsula, the Gaza Strip, the West Bank, East Jerusalem, and the Golan Heights. From the beginning, the United States sought a ceasefire in order to prevent an Arab defeat bad enough to force the Soviet Union to intervene. U.S. officials were also concerned about alienating pro-Western Arab regimes, especially after Egypt and several other Arab states accused the United States of helping Israel and broke diplomatic relations. Yet after June 5, the administration did not also demand an immediate Israeli pullback from the territories it had occupied. U.S. officials believed that in light of the tenuous nature of the prewar armistice regime, they should not force Israel to withdraw unless peace settlements were put into place.

The administration’s concept of “land-for-peace” solidified following the war. “Certainly,” Johnson proclaimed, “troops must be withdrawn; but there must also be recognized rights of national life, progress in solving the refugee problem, freedom of innocent maritime passage, limitation of the arms race, and respect for political independence and territorial integrity.” Yet after the Arab states rejected a Latin American UN resolution calling for full withdrawal in exchange for recognition of “the right of all states in the area to live in peace and security” and a similar U.S.-Soviet draft, the Johnson administration scaled back its efforts to promote a settlement. Though alarmed by Israeli decisions to absorb East Jerusalem and establish Jewish settlements in the occupied territories, U.S. officials believed that the Arabs remained too inflexible to justify pressing Israel to withdraw.

The Johnson administration did not re-enter the diplomatic fray until October, when the Soviets began to circulate a new version of the resolution that they had promoted that summer. Knowing that Israel would reject the Soviet draft, the administration encouraged the United Kingdom to introduce an alternative resolution devised by UN Ambassador Arthur Goldberg. Security Council Resolution 242, adopted on November 22, called for Israel’s withdrawal from “territories occupied in the recent conflict” in exchange for “termination of all claims or states of belligerency and respect for and acknowledgment of the sovereignty, territorial integrity and political independence of every State in the area and their right to live in peace within secure and recognized boundaries free from threats or acts of force.” Interpreted differently by Israelis and Arabs, this resolution would nonetheless remain the bedrock of all subsequent U.S. efforts to resolve the Arab-Israeli dispute.