Origins of a Diplomatic Tradition

Despite their status as colonial subjects of the King, some 18th century Americans already had a great deal of experience negotiating with ministers at the highest levels of the British Government. 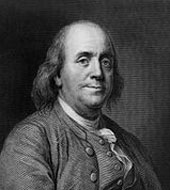 Benjamin Franklin
In 1757, Benjamin Franklin began his first term as Pennsylvania’s colonial agent in London. By the end of his second term (1765-75), Franklin also represented Massachusetts, Georgia, and New Jersey. Other distinguished Americans, such as Arthur Lee, served in a similar capacity.

Franklin secretly negotiated with the British in 1774 to prevent the outbreak of war. Although he was unsuccessful, he gained valuable diplomatic skills. When war became inevitable, a nucleus of Americans, including Franklin, was ready to assume the tremendously important task of representing the breakaway nation in the courts of Europe.