The World in the Early-19th Century - Short History - Department History

The World in the Early-19th Century

A rare set of international circumstances gave the United States the luxury to concentrate on domestic expansion during the middle of the 19th century, because the country faced no serious external threats until the Civil War (1861-1865). 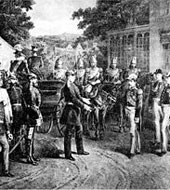 Napoleon surrenders his sword.
After the defeat of Napoleon in 1812, a stable and complex balance of power evolved in Europe. Maintaining that delicate balance deterred possible aggressors from intervention in the New World, because any nation tempted to interfere in the affairs of the Western Hemisphere would have would have found itself in considerable difficulty from its neighbors at home. The result was that the United States enjoyed an extended period of tranquility—a very different atmosphere from the days of the early republic.

The United States was free to practice a liberal form of nationalism, one that stressed a vague good will toward other nations rather than the pursuit of an active foreign policy. “Wherever the standard of freedom has been or shall be unfurled, there will her heart, her benedictions, and her prayers be. But she does not go abroad in search of monsters to destroy,” wrote John Quincy Adams in 1821. The republic would influence the world by offering an example rather than by exercising force. That sentiment would govern American foreign policy for nearly 100 years, until the outbreak of World War I. 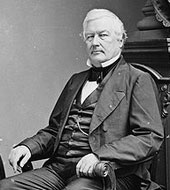 For example, in response to the liberal revolutions of 1848 in Europe, President Millard Fillmore insisted that the United States must grant to others what it wanted for itself: the right to establish “that form of government which it may deem most conducive to the happiness and prosperity of its own citizens.” It became an imperative for the United States not to interfere in the government or internal policy of other nations. Although Americans might “sympathize with the unfortunate or the oppressed everywhere in their fight for freedom, our principles forbid us from taking any part in such foreign contests,” Fillmore explained.