The Truman Doctrine and the Marshall Plan

The first step was the “Truman Doctrine” of March 1947, which reflected the combativeness of President Harry Truman. Truman wanted to “scare the hell” out of Congress. Arguing that Greece and Turkey could fall victim to subversion without support from friendly nations, Truman asked Congress to authorize $400-million in emergency assistance. To justify this course, he said: “I believe we must assist free peoples to work out their destinies in their own way.” The key to preventing the overthrow of free nations was to attack the conditions of “misery and want” that nurtured totalitarianism. 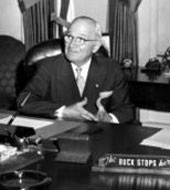 Soon this general principle was applied to Western Europe as a whole. In June 1947, Secretary George C. Marshall proposed the extension of massive economic assistance to the devastated nations of Europe, saying that the policy of the United States was not directed “against any country or doctrine but against hunger, poverty, desperation, and chaos. Its purpose should be the revival of a working economy in the world so as to permit the existence of political and social conditions in which free institutions can exist.”

What the Secretary of State left unsaid was that while the U.S. plan would be open to the Soviet Union and its satellites in Eastern Europe, it emphasized the free market economy as the best path to economic reconstruction—and the best defense against communism in Western Europe. Congress responded to Marshall’s proposal by authorizing the European Recovery Program, better known as the Marshall Plan. An investment of about $13 billion in Europe during the next few years resulted in the extraordinarily rapid and durable reconstruction of a democratic Western Europe.