The Department's domestic budget for 1790, not counting the expenses of employees overseas, was $7,961; a figure which included firewood and stationery. Jefferson himself was paid $3,500. Total expenditures in 1791, both domestic and foreign, were $56,600.

In 1807 the Department's staff included only a chief clerk, five other clerks, and some part-time help, along with a few retainers. The Secretary of State's salary had been raised to $5,000 per year. In 1818 a Presidential order authorized a staff that included a chief clerk, seven other clerks, and a few other minor employees. In 1820, expenditures for domestic operations reached $87,300; the cost of overseas operations totaled $253,400.

Despite the increase in expenditures, the Department of State and its foreign missions were chronically overworked—and so was the Secretary of State. 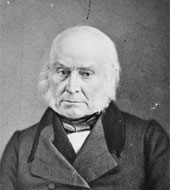 Secretary of State John Quincy Adams
In 1817, John Quincy Adams complained of excessive responsibilities shortly after assuming his duties. “Business crowds upon me from day to day requiring instantaneous attention,” he wrote to his wife Louisa. “Unless everything is disposed of just as it occurs, it escapes from the memory and runs into the account of arrears.”

To streamline the bureaucratic process, as many as ten clerks, each of whom worked in a specific subject area, reported to the Chief Clerk. Their duties included writing consular and non-diplomatic correspondence, forwarding commissions and other documents to American or foreign ministers, preserving books and papers of the Congress, translating documents, and preparing passports, certificates, and exequaturs for foreign consuls. Other clerks copied and filed documents.