President Nixon pursued two important policies that both culminated in 1972. In February he visited Beijing, setting in motion normalization of relations with the People's Republic of China. In May, he traveled to the Soviet Union and signed agreements that contained the results of the first Strategic Arms Limitation Treaty talks (SALT I), and new negotiations were begun to extend further arms control and disarmament measures. 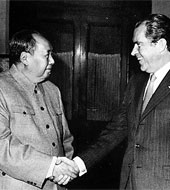 These developments marked the beginning of a period of “détente” in line with a general tendency among Americans to favor a lower profile in world affairs after the Vietnam War, which finally ended in 1975 with the last withdrawal of U.S. personnel. While improvements in relations with the Soviet Union and the People’s Republic of China signaled a possible thaw in the Cold War, they did not lead to general improvement in the international climate. The international economy experienced considerable instability, leading to a significant modification of the international financial system in place since the end of World War II.

Although Secretary Rogers still had broad responsibility for foreign policy, including Europe, the Middle East, Africa, Latin America, and international organizations, the Department of State resented its exclusion from key policy decisions, and the Secretary continually fought to make his views known.