Representing the United States abroad has been a dangerous job since the beginning of the Republic, but that was never truer than during the Carter Administration. In the wake of a successful revolution by Islamic fundamentalists against the pro-American Shah of Iran, the United States became an object of virulent criticism and the U.S. Embassy in Tehran was a visible target. On November 4, 1979, Iranian students seized the embassy and detained more than 50 Americans, ranging from the Chargé d’Affaires to the most junior members of the staff, as hostages. The Iranians held the American diplomats hostage for 444 days. While the courage of the American hostages in Tehran and of their families at home reflected the best tradition of the Department of State, the Iran hostage crisis undermined Carter’s conduct of foreign policy. The crisis dominated the headlines and news broadcasts and made the Administration look weak and ineffectual. Although patient diplomacy conducted by Deputy Secretary Warren Christopher eventually resolved the crisis, Carter’s foreign policy team often seemed weak and vacillating. 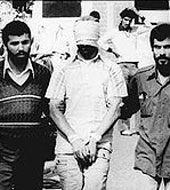 U.S. hostage being paraded in front of the public

The Administration’s vitality was sapped, and the Soviet Union took advantage of America’s weakness to win strategic advantage for itself. In 1979, Soviet-supported Marxist rebels made strong gains in Ethiopia, Angola, and Mozambique. Vietnam fought a successful border war with China and took over Cambodia from the murderous Khmer Rouge. And, in late 1979, the Soviet Union invaded Afghanistan to support its shaky Marxist government.

In light of these challenges to global stability, President Carter significantly altered his view of both the Soviet Union and the advice of his own advisers. Carter initially favored Secretary Vance’s policy of negotiation, but by 1980 was more receptive National Security Adviser Zbigniew Brzezinski’s more confrontational stance. Once again the National Security Council and the Department of State were in open conflict. The issue came to a head when Secretary Vance opposed a mission to rescue the hostages in Iran—a move championed by Brzezinski. Vance had been correct—the 1980 mission was a debacle. But Vance was frustrated and he resigned in protest in April 1980. Cyrus Vance was the first Secretary of State clearly and publicly to tie his resignation to a difference of opinion over policy since William Jennings Bryan in 1915. Carter chose Senator Edmund Muskie as his new Secretary.