The Department of State played a key role in America’s westward expansion. In 1803, the Louisiana Purchase brought a vast chunk of the continent between Canada and Mexico under United States control. President James Monroe's Administration arranged the Rush-Bagot Agreement of 1817 and the Convention of 1818, which settled disputes with Great Britain over the Great Lakes and the border with Canada westward along the 49th parallel to the Rocky Mountains, and the Adams-Onis (or Transcontinental) Treaty with Spain (1819), which added Florida to the national domain and settled the boundary with Mexico on advantageous terms. 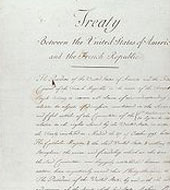 The Treaty of the Louisiana Purchase

As the United States spread across the continent, and American prestige and influence grew, diplomats worked hard to keep the European nations out of the rest of the Western Hemisphere. Secretary of State John Quincy Adams succinctly summed American thought in the Monroe Doctrine of 1823.

The Monroe Doctrine “closed” the Western Hemisphere to further colonization, announced that the United States would refrain from interference in European affairs, and warned the Europeans to stay out of the domestic affairs of any of the new American Republics. As President Monroe’s message stated: “We could not view any interposition for the purpose of oppressing [the nations of Latin America], or controlling in any other manner their destiny, by any European power in any other light than as the manifestation of an unfriendly disposition toward the United States.”

Although the young United States was still too weak to enforce the Monroe Doctrine, its presentation in 1823 was a clear indication that the United States saw itself as the most senior of the republics and the leader of the free nations of the Western Hemisphere.