Of all the policy successes during this era, the Department of State and President Bush are most clearly associated with the successful effort to roll back the Iraqi invasion of Kuwait. 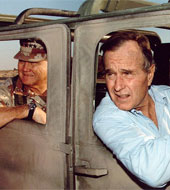 When Saddam Hussein invaded his small, oil-rich neighbor in the summer of 1990, the Department faced its first full-scale post-Cold War international crisis. Bush’s foreign policy team forged an unprecedented international coalition consisting of the NATO allies and the Middle Eastern countries of Saudi Arabia, Syria, and Egypt to oppose Iraqi aggression. Although Russia did not commit troops, it joined the United States in condemning Iraq, its long-time client state. The Department of State orchestrated the diplomacy for this grand coalition’s effective air campaign in January 1991, which was followed by “Operation Desert Storm,” a 100-hour land war, which expelled Iraqi forces from Kuwait.

During the Gulf crisis, Secretary of State Baker relied heavily on two men—John Bolton, Assistant Secretary of State for International Organization Affairs, who played a significant role in coordinating relations with the United Nations, and Under Secretary of State for Political Affairs Robert Kimmitt, who was Baker’s day-to-day crisis manager. One innovation that greatly facilitated decision-making during the Gulf War was the use of teleconferences, which saved many hours of travel time. Instead, Baker and others could communicate and display charts through cameras and television screens. 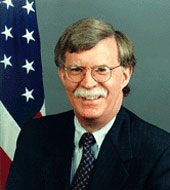 After the success in Kuwait, President Bush paid special tribute to the Foreign Service officers who labor in relative obscurity until they are caught up in a dangerous conflict or become the victims of international terrorism. President Bush made a special visit to the Department of State to honor 33 employees for their service at our embassies in Baghdad and Kuwait, which included finding food and supplies for trapped Americans in those countries and helping children to safe havens after fighting erupted. Acknowledging the peril most Americans never see, Bush said, “I know that often your jobs are not comfortable or safe.”

Iraq was not the only trouble spot in the Middle East during Bush’s four years in office. The perennial tension between Israel and its Arab neighbors continued to test the expertise of the many U.S. ambassadors and area experts. Baker’s personal involvement, reflected in numerous trips to the region, helped bring about the first face-to-face talks between Israel and all of its Arab neighbors in Madrid, beginning in October 1991. Secretary Baker’s “shuttle diplomacy” rivaled Henry Kissinger’s in 1974. From the beginning of Baker’s tenure until August 23, 1992, when he resigned to become White House Chief of Staff, he made 217 trips abroad.

Lawrence Eagleburger, who succeeded Baker, became the first Foreign Service officer to serve as Secretary of State. During a 27-year government career, Eagleburger had been a staffer for Kissinger’s National Security Council, and held numerous senior positions at the Department of State, including Under Secretary for Political Affairs, Deputy Under Secretary for Management, and Assistant Secretary for European Affairs. Eagleburger's appointment reflected Bush’s deep respect for the Foreign Service. Bush compiled an impressive record of nominating career officers to ambassadorships (72 percent), one of the best records for all Presidents in the post-1945 era.