Domestic Upheaval and a New President

Lyndon B. Johnson became President after Kennedy’s assassination in November 1963. 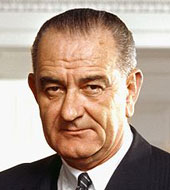 Although his foreign policy team initially remained the same, there were subtle changes. As Vice President, Johnson had been kept out of the foreign policy decision-making process by the Kennedy team. Secretary Rusk and the Department of State had often suffered similar treatment during the Kennedy years. Shared humiliation and a sense of frustration made the new President sympathetic to Rusk and the Department of State. From that point on, Rusk was a strong and influential Secretary of State. He repaid Johnson’s trust and support by loyally defending the President’s increasingly unpopular Vietnam policy to Congressional critics, the American public, and world opinion.