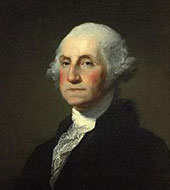 Washington and Jefferson lobbied Congress for a large enough appropriation to support a limited number of overseas missions, in a style comparable to those of other nations. Jefferson drew a distinction between a diplomatic service, conducting political relations with foreign countries, and a consular service, dealing with commercial matters and the needs of American citizens abroad. By 1791, diplomatic missions had been established in five European countries: England, Spain, France, Holland, and Portugal.

Ministers concentrated on two important responsibilities: reporting on significant activities in their countries of residence and executing formal diplomatic instructions transmitted to them from the Department of State.

By 1792, 16 consulates had been created, most of them in Europe. Jefferson saw the consulates as a valuable source of intelligence, and he sent a circular letter to consuls asking them to report to him regularly “such political and commercial intelligence as you may think interesting to the United States.” He mentioned particularly news of American ships and also “information of all military preparations and other indications of war, which may take place in your ports.”

Consuls did not receive salaries or allowances for expenses, and they lived off the fees they charged for their services. Because their income was so uncertain, consuls often served for many years in the same location and paid little attention to their official duties. One consul in La Guaira, Venezuela, was dismissed because “not a single communication” had been received from him in seven years.

The precarious nature of U.S. consuls overseas was a concern to Jefferson. He feared that the few Americans overseas who were eligible to serve as consuls might be in debt or “…young, ephemeral characters in commerce without substance or conduct.” Even worse, if appointed, they “…might disgrace the consular office, without protecting our commerce.” Congress amended the law requiring consuls and vice-consuls to be American citizens and, when necessary, reputable foreign citizens were appointed as vice-consuls.