The election of Democrat Jimmy Carter as President in 1976 brought a new emphasis, based on Carter’s personal ideology, to U.S. foreign policy. Carter believed that the nation’s foreign policy should reflect its highest moral principles—a definite break with the policy and practices of the Nixon Administration. In 1977, Carter said, “For too many years, we’ve been willing to adopt the flawed and erroneous principles and tactics of our adversaries, sometimes abandoning our own values for theirs. We’ve fought fire with fire, never thinking that fire is sometimes best quenched with water. This approach failed, with Vietnam the best example of its intellectual and moral poverty. But through failure we have now found our way back to our own principles and values, and we have regained our lost confidence.” 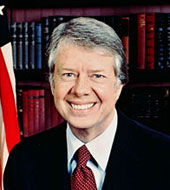 Carter refused to continue the past practice of overlooking the human rights abuses of our own allies, and was particularly tough on South Korea, Iran, Argentina, South Africa, and Rhodesia (Zimbabwe). He also ended more than 30 years of U.S. political and military support to one of Latin America’s most abusive leaders—President Somoza of Nicaragua.

Initially, the diplomatic initiatives of President Carter and Secretary Vance were quite successful. In 1978, the Administration completed the process begun during the Nixon Administration and normalized relations with mainland China. President Carter himself facilitated the Camp David Peace Accords between Israel and Egypt, which paved the way for new progress in the Middle East and an end to the long-running hostilities between the two sides. Carter and Vance also persuaded the Senate to consent to a treaty promising to return the Panama Canal to Panamanian control by 1999. In 1979, President Carter and Soviet leader Leonid Brezhnev signed a follow-on nuclear arms control agreement, known as SALT II.

Carter’s new emphasis on human rights led to a Congressional requirement for the annual submission by the Department of State of “a full and complete report” on human rights practices around the world. The first volume of the Country Reports on Human Rights Practices covered the year 1976 and was released in 1977. In less than 300 pages, the report analyzed the situation in 82 countries. In contrast, 195 individual reports were included in the volume for the year 2000, covering virtually every country in the world, and the overall report was about 6,000 pages long.