Initially, Department of State officials and Bush’s foreign policy team were reluctant to speak publicly about German “reunification” due to fear that hard-liners in both the German Democratic Republic (GDR) and the Soviet Union would stymie reform. Although changes in the GDR leadership and encouraging speeches by Gorbachev about nonintervention in Eastern Europe boded well for reunification, the world was taken by surprise when, during the night of November 9, 1989, crowds of Germans began dismantling the Berlin Wall—a barrier that for almost 30 years had symbolized the Cold War division of Europe. By October 1990, Germany was reunified, triggering the swift collapse of the other East European regimes. 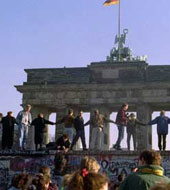 People celebrating the fall of the Berlin Wall.

Thirteen months later, on December 25, 1991, Gorbachev resigned and the Union of Soviet Socialist Republics dissolved. President Bush and his chief foreign policy advisers were more pro-active toward Russia and the former Soviet republics after the collapse of the Communist monolith than while it was teetering. In a series of summits during the next year with the new Russian President Boris Yeltsin, Bush pledged $4.5-billion to support economic reform in Russia, as well as additional credit guarantees and technical assistance.

The two former Cold War adversaries lifted restrictions on the numbers and movement of diplomatic, consular, and official personnel. They also agreed to continue the Strategic Arms Reduction Treaty negotiations (START), begun before the collapse of the Soviet Union, which set a goal of reducing their strategic nuclear arsenals from approximately 12,000 warheads to 3,000-3,500 warheads by 2003. In January 1993, three weeks before leaving office, Bush traveled to Moscow to sign the START II Treaty that codified those nuclear reductions.