The Proper Selection of Dispatches

By Peter Cozzens
Office of the Historian, U.S. Department of State

In my last post, “Our Ministers Do Not Express Their Real Opinions,” I said that I intended to devote this post to a discussion of how the State Department’s reaction to complaints from ministers (ambassadors) that their sensitive dispatches might appear in Foreign Relations of the United States (FRUS) volumes dampened candor in their reporting. The nature of historical research being what it often is, you think you know what you need, where to find it, and when to wrap up the research—only to come across something that challenges your assumptions. For this post, I find myself writing on something unexpected.

My research had led me to conclude that the Department never solicited the input of ministers before submitting diplomatic correspondence to Congress for publication as an annual FRUS volume. That is, until I came across in the State Department records at the National Archives an October 1874 letter from U.S. Minister to China S. Wells Williams to Secretary of State Hamilton Fish, in which Williams acknowledged a letter of instruction from Fish soliciting ministerial comments on proposed FRUS content and offered his recommendations as to which dispatches from Peking were appropriate for publication in FRUS. 1

Intrigued and perplexed, I dug further and found that Fish sent a similar letter to all ministers. The circular letter covered a list of the legation dispatches and asked ministers to advise him if they objected to the publication of any items, in whole or in part.2 Fish regularized the consultative process in 1875 and 1876, sending his request for input in April, with an October deadline.

I have been unable to determine why Fish decided to involve ministers in the FRUS selection process. The ministers to China and Japan both had complained that the local British-owned press habitually used correspondence from FRUS to skewer them personally and condemn U.S. policy. And then there was the bitter aftertaste of the Marsh episode. Perhaps Fish concluded that enhancing ministers’ stake in FRUS would both spare them future embarrassment and minimize their complaints about the series.

In any event, in 1875 and 1876, a third of America’s thirty-seven ministers submitted their recommendations of dispatches for publication. Either the first Assistant Secretary of State (today’s Deputy Secretary) or more often Second Assistant Secretary William Hunter—a career official—made the final call on FRUS content.

Ministers also often asked that dispatches containing disparaging comments about foreign officials or reporting on tendentious and unresolved issues either be omitted from the annual submission to Congress and FRUS, or that sensitive portions be excised. Several also requested that their dealings with other foreign missions also be kept confidential. 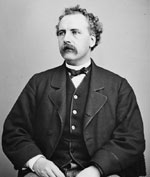 Minister to Turkey George H. Boker. Poet, sonnet writer, boxer, attorney, and Republican stalwart, Boker proved a talented diplomat. In spite of his ignorance of Turkish and distrust of interpreters, Boker nonetheless cultivated a wide array of close personal contacts within the Ottoman elite.
By way of example, in 1874 U.S. Minister to Turkey George H. Boker asked the Department to withhold two despatches that his predecessor had written. The first conveyed the “designs and diplomatic character of the Russian ambassador, which would not be very acceptable reading to my distinguished colleague.” The second contained unflattering remarks about a prominent figure in the Ottoman Empire, publication of which, Boker said, could cause difficulties “if he were in quest of contemporary opinion as to himself, and he should unfortunately stumble upon the short but all sufficing characterization of his public qualities.” Assistant Secretary William Hunter accordingly instructed the Diplomatic Bureau, which assembled FRUS, to omit the offensive material from the 1874 volume.3

Senior Department officials generally accepted recommendations from the field, but there were numerous cases in which they overruled ministers. Hunter directed that four dispatches the Minister to Chile recommended for publication not be released, one of which was a lengthy, self-congratulatory report from the minister about his success in uncovering pervasive malfeasance at the Valparaiso consulate.4 Despite Minister to Turkey Horace Maynard’s request that none of his reports on “Affair of Tripoli” appear in FRUS 1875, the Department published every one of consequence.5

Minister to China George F. Seward also saw himself overruled. He strongly urged that nothing on Chinese immigration be published, “as the subject is one of a specifically delicate nature.” The Department saw the matter otherwise. No doubt to put its position on record with California Congressmen, for whom the issue was an explosive one, the Department published several long despatches on the topic, including a “long and frank” discussion between Seward and the Chinese Foreign Minister.6

The experiment in soliciting legation input to Foreign Relations died with the Grant administration. No protest arose from the field. Only two ministers took it upon themselves to submit recommendations. 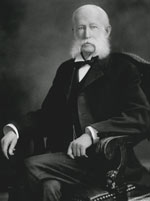 Minister to Mexico John W. Foster. A respected attorney and diplomat, Foster had been a brevet brigadier general in the Civil War. He became secretary of state in the Benjamin Harrison administration and was the grandfather of Secretary of State John Foster Dulles.
Anticipating a forthcoming special session of Congress in October 1877 to review President Rutherford B. Hayes’ refusal to recognize the new Mexican government of Porfirio Diaz, U.S. Minister to Mexico John W. Foster offered his unsolicited advice as to such despatches as “may be desirable to transmit” to Congress. Acting Secretary of State Frederick W. Seward declined to provide the hostile, Democrat-controlled Congress any of these documents before or during the special session, and only fourteen of forty-eight despatches that Foster had identified as “of a political and historical character suitable for publication” found their way into Foreign Relations 1877.7

Writing from his home in Galena, Illinois, recently retired Minister to France Elihu B. Washburne made known his publication preferences. The Department obliged him.8 The next year only the newly arrived Minister to Germany made known his views on FRUS. Seemingly unaware of the unwritten change in policy, Minister Bayard Taylor wrote Secretary William M. Evarts that his staff had informed him “that it is customary at this time of the year, when certain portions of the diplomatic correspondence are selected for publication, for the representatives of the government to indicate such despatches as they may desire for special reasons to be either withheld or given to the public,” and accordingly he drew up a list. The Department compiler accepted his recommendations, the last they received from the field. From 1878 onward, ministers confined themselves to grumbling over unwelcome Foreign Relations content after its publication.9

What can we learn about nineteenth-century FRUS from Fish’s short-lived initiative? At a minimum, it offers further evidence that FRUS content was reviewed at the highest levels of the Department. It also illustrates the absence of clearly articulated criteria for selecting correspondence for submission to Congress and subsequent publication, as ministers seem not to have been informed of the reasons for Department actions upon their recommendations. Finally, the response to Fish’s calls demonstrates that some ministers understood both the benefits and potential pitfalls of transparency in government.

Fish’s initiative also ended up providing a useful lesson about the practice of history, namely that there’s no substitute to thorough research for fleshing out the full story behind even the things that you think you already know.