The new challenges and responsibilities of the Cold War convinced many in Congress that Truman’s foreign policy establishment needed reform because it relied heavily on a few key White House aides. In July 1947, Congress passed the National Security Act, which would have a profound effect on the Department of State. Proponents of reform wanted to coordinate foreign, defense, and domestic policy by establishing the National Security Council (NSC) under the chairmanship of the President and composed of only six permanent members: the Secretaries of State, Defense, Army, Navy, and Air Force, and the Chairman of the National Resources Board. The President could designate the heads of other executive departments, such as the Director of the new Central Intelligence Agency, to attend if needed. 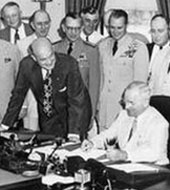 Under the terms of the legislation, the NSC would consist of a small staff headed by an Executive Secretary appointed by the President. There was no legislative provision for the post of “national security adviser,” and the small NSC staff had no role in the formulation or implementation of policy.

Truman did not take well to the idea that his foreign policy advisers would be mandated by Congressional legislation, and he rarely attended the initial meetings of the National Security Council. The Secretary of State was named as the ranking member in his absence, and the Department of State controlled the NSC and its operations. The State Department’s Policy Planning Staff wrote most of the NSC’s papers, which after discussion by the Council and approval by Truman, were then disseminated to the bureaucracy in summary form as NSC actions.

Under Truman, the NSC did not displace the Secretary of State as the President's senior adviser on international questions; it simply required all agencies to contribute to the decision-making process. With the proliferation of new issues and new U.S. agencies active overseas, the State Department could not on its own control everything. The NSC was the mechanism through which the Department of State could exert consistent influence on national security policy. Used properly, it had the potential to deploy the vast array of American power—diplomatic, political, economic, psychological, and military—to reach common goals. This was an objective that the Department had failed to achieve during the troubled years between 1914 and 1945.

But the Department of State could only realize its full potential in the new institutional context if the Secretary of State gained the confidence of the President. Both Secretary Marshall and Secretary Acheson did, and Truman tended to bypass the slower-moving National Security Council. Truman was always anxious to complete action on important questions, and he wanted to make his decision as soon as he had a sound basis to do so. Secretary Acheson, noted one biographer, “could always provide an adequate basis, or its appearance, before any rival body . . . In the race with time, which was the key to influence over the President, Acheson was unbeatable.”