As Supreme Allied Commander in Europe during the war, President Eisenhower had a well-earned reputation for staff work and organization. He was determined to make the Department of State a part of the NSC’s structured system of integrated policy review, and the NSC enjoyed a renaissance during his Administration. Discussion papers were prepared by the NSC’s own Planning Board—not the Department of State, and the Planning Board ironed out interdepartmental differences before a policy paper went to the NSC. The full Council, with Eisenhower almost always in attendance, debated the policy options and made decisions, which were then sent as recommendations to the President in the form of NSC actions. Another subcommittee, the Operations Coordinating Board, made sure that the bureaucracy carried out the recommendations approved by the President. 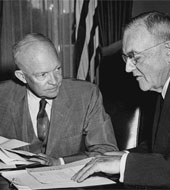 Dulles drew a sharp line between the policy review process and day-to-day operations, which he felt were the exclusive province of the Department of State. Dulles also believed that some issues, such as covert operations, were too sensitive to be discussed by the full NSC. Because of his close ties to the President and his even closer relationship with his brother, CIA Director Allen Dulles, John Foster Dulles was second in importance only to the President at any NSC meeting. President Eisenhower often dominated the discussions, but Dulles remained his most influential foreign policy adviser.

Dulles was a staunch anti-communist. For this Secretary of State there was no grey area—nations were either part of the “Free World” or part of the Soviet bloc; he had little time for neutralism or non-alignment. Secretary Dulles also had a tendency to speak dramatically. In a 1954 speech, he said that the United States would meet Soviet provocations not necessarily where they occurred but where the United States chose, based on its “deterrent of massive retaliatory power.” In a 1956 Life magazine interview, Dulles described how he had passed the word to the Chinese and the North Koreans that unless the communist powers signed the Korean armistice, the United States would unleash its atomic arsenal. Dulles claimed that by moving to the brink of atomic war, he ended the Korean War and avoided a larger conflict. From that point on, Dulles was associated with the concepts of “massive retaliation” and “brinksmanship,” a supposedly reckless combination of atomic saber rattling and eyeball-to-eyeball standoffs. In reality, the so-called atomic threat to China was less definitive than Dulles had claimed, and the Eisenhower Administration policy of “massive retaliation” was far more cautiously based on mutual atomic deterrence.

During the Eisenhower years, the United States consolidated the policy of containment, although some critics have argued that the administration extended it too far. The United States ratified a series of bilateral and multilateral treaties designed to encircle the Soviet Union and its allies, including the People’s Republic of China (PRC). Among these arrangements were the Central Treaty Organization (CENTO); the Southeast Asia Treaty Organization (SEATO); and bilateral defense or security treaties with Japan, South Korea, the Republic of China, and the Philippines. Secretary Dulles was the most prominent advocate of global containment and he traveled the world tirelessly to ensure its success. In 1954, the United States took a strong stand in favor of the Chinese Nationalists when the PRC bombarded Taiwan’s island strongholds. In 1955, assistance began to flow to the new nation of South Vietnam, created after the withdrawal of France from Indochina. In 1958, the United States again rattled the saber to protect the Chinese Nationalists’ offshore islands.