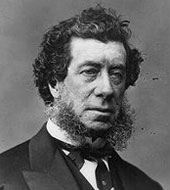 In the early 1870s, Secretary of State Hamilton Fish reorganized the Department, expanding the existing “bureau” system, in place since the 1830s. To cope with the growth in overseas missions and consulates, Fish established two diplomatic bureaus and two consular bureaus with geographic responsibilities. The First Diplomatic Bureau and the First Consular Bureau, dealt with the major European nations, China, and Japan. The second pair of bureaus managed communications with the rest of the world—Latin America, the Mediterranean region, Russia, Hawaii, Japan, and Liberia. Several other bureaus were created or underwent name changes—the Law Bureau, Bureaus of Accounts, Bureau of Indexes and Archives, the Statistical Bureau, Bureau of Pardons and Commissions, the Passport Bureau, and the Domestic Records Bureau. Congress also passed legislation in 1874 that authorized a Third Assistant Secretary as well as a private secretary to the Secretary of State. There would be no further reorganization until 1909.

In 1875 the Department of State moved into an imposing new home—the State, War, and Navy Building located at 17th Street and Pennsylvania Avenue, N.W., adjacent to the White House.